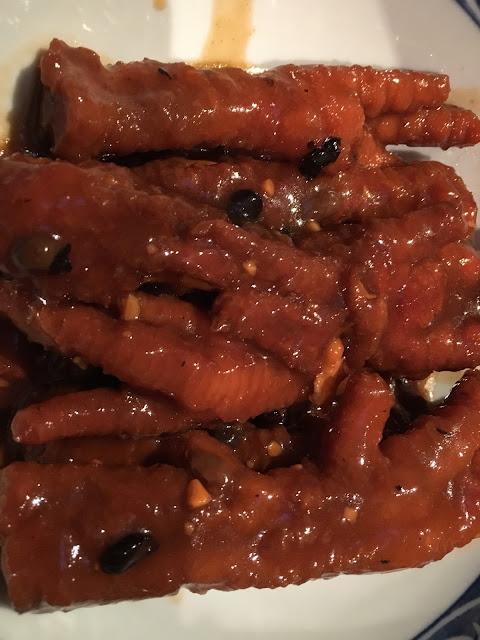 Haha, I do not mean to frighten any one at all with a close up shot of well marinated chicken feet, prepared ala Cantonese style.   Most of the Australian population would associate this with a yumcha offering on a trolley at lunch time, although they are often now covered up under bamboo basket covers.

Well I did get my bright looking and savoury cooked chicken feet as in a snack box for take away.    Ah, the delights of the food court after you get out of your railway platforms from the train.  The place is often lively, even after working hours and on weekends, as a kind of Asian diaspora gather for no cooking time and so much choice in East Asian culinary - often with their Aussie mates and partners.   Hurstville, I am told,  has the highest concentration of people with a China background for suburbs in Australia.

Back to my chicken feet - it lived up to my expectations.   Preparation is a three step journey, first they are marinated after clipping the claws. (ahem....)  The second stage is to deep fry the feet, plain.  If one likes a puffed up look of the feet when served, after deep frying, immediately place them in a bowl of ice cubes.

Shaoxing wine,  Char siew sauce and star anise are used to flavour, massage and marinade the feet, for at least over night.    The thus prepared feet are then stir fried with shallots, black bean sauce, abalone sauce, garlic cloves and chillies.  Season with pepper and sugar at your own discretion.

The chicken feet from Hong Kong Delight are not rubbery.  They exude yummy flavour, good texture and are not over powering.   If one cannot go for chicken feet, the same recipe can be used for chicken fillets or pork cubes.   It brought me back to what retro Hong Kong food tasted like. 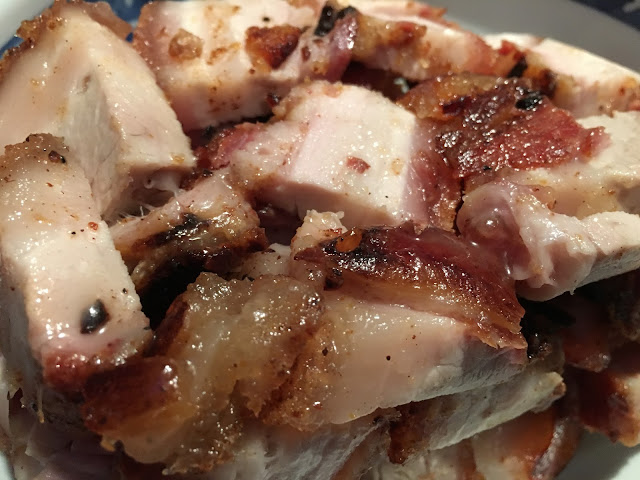 With bad cholesterol fears thrown out the window by the medical community and the media, after decades of frightening us about its dangers to human health,  I reckon we are back in safe territory to hark back and consume some of the so called old fashioned comfort foods.  In southern Chinese culture and tradition, that means anything tasty to do with the pig.   Okay, at least do just eat in moderation and never in excess.


The range of barbecued meats hanging in front of the glass casing at the Hong Kong Delight caught my eye.    Their colours - Char siew, roast duck, soy sauced chicken, spare ribs and roast pork -  were not over the top.   The texture spoke of technique and skills.  There was no extra oiliness.   The meat under the crisp was juicy tender, just as in my Siew Yoke or roast pork serve in the photo above.   You can have a whole meal with steamed rice or noodles at communal seating around Hong Kong Delight.


My fraternity in Chatswood may want to faint at the amount of fat content in the photo.   This has always been an on gong debate.   The significant move to more lean meat and reduced fat share has resulted in a rather new cut of such Chinese barbecued meats for more than two decades now.   However it all shows in the taste.   I reckon the choice of more fat or less fat as you ask the Uncle to chop up your purchase depends on what you intend to use the meat for - eat them by themselves,  stir fry with noodles or braise them in stew or cook further.


My serve of roast pork as shown above had this rewarding bite of crunchiness for its top, followed by a mellow agreeable swallow of yummy meat underneath.   It was perfect for a snack, freshly consumed or even with a salad.

Hong Kong Delight is located above the railway station at Hurstville NSW.


My impressions of Hong Kong Delight at Hurstville NSW:
Ambiance:  2.5 out of 5