The Cow and the Moon Artisan Gelato - Enmore NSW 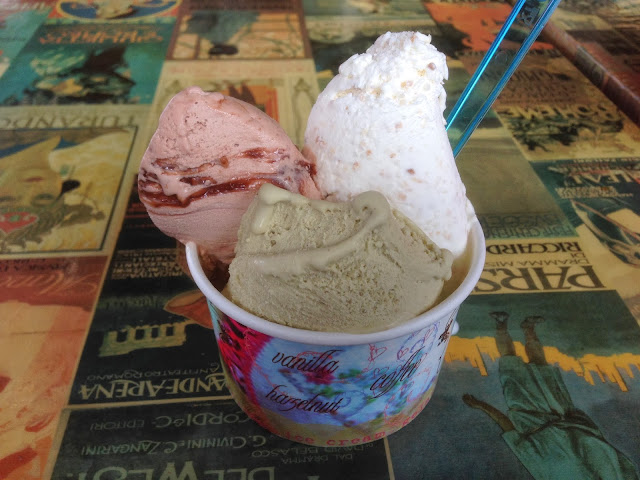 There are aromatic gelatos in many places dotted across Australian conurbations, thanks to southern European expertise, offering alternatives to mainstream Australian ice cream from the UK and Asian varieties with a rather startling choice of exotic flavours.  So what is so different about this sorbet and gelato bar at the corner of London Street and Enmore Road in the suburb of Enmore, perhaps a less well known cousin of sprawling nearby Newtown.  The Lord and Lady of The Cow and the Moon - John and Wendy Crowle - hailed from the NSW South Coast, a bakery past and has a love affair with Italy.  John has a fantastic philosophy about his business - and it shows, with sentiment and deja vu invoked in the hearts of the customers, families, children and baby boomers. And son Sam specialises in his single origin coffees.  And his sister Olivia is cheerful.

I had eyed going to sample the coconut flavoured gelato for some time now. It won an award.  Next is to test the pistachio, which always provides the strengths and any shortcomings of any gelato maker. And then I could not resist hazelnut roche. Were they going to be too creamy or thin? Oh why did I not get the salted caramel - okay, maybe next time!  Gelato is best consumed fresh, like seafood.

I found the pistachio with a vivid colour, smooth texture and with a pure taste - not overwhelming, perhaps a bit too creamy for me but overall with  a fresh attitude and with a less fatty sensation on my lips.  Gelato is European in origin, so I am a bit wary of tropical flavours with them - when I dipped into my coconut, it was not gritty, it had just the right  intensity for a difficult flavour and it was not over tyne top.  In Italian, gelato literally means frozen but I did not get my mouth or tongue frozen - merely awakened, teased and satisfied.  I have a weakness for hazelnut, so I knew I was going to be positively prejudiced with my hazelnut roche choice.  The hazelnut flavours were not powered by sweetness but stood their ground. 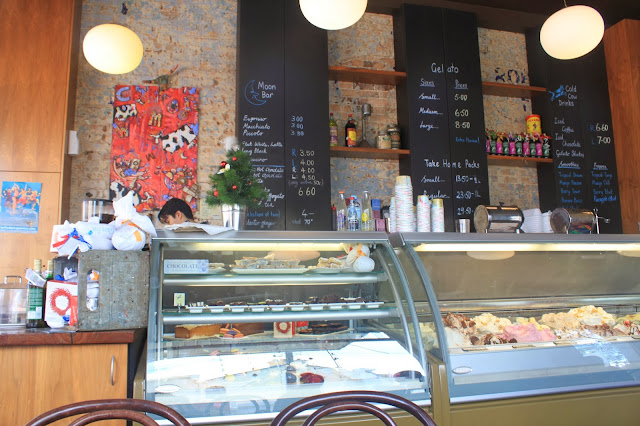 Location can help. It is easier to find vehicle parking in Enmore - and there is the Enmore Theatre with a variety of gigs and acts that attract the very demographic who may want a pre or post performance place to sit down in or just hang around.  I noticed that the menu can be simple and limited - just coffee and the cold stuff - but that may be its most attractive point. Oh yes, it can get complicated when children look at the variety and may want more than they can consume, especially with accompanying dotting parents. The smile on a child's face pressed against the glass is echoed by the ambiance of the cafe and the easy going manner of the staff, especially Sam.  People can hang around casually waiting for takeaway or just a cone of sorbet - and they feel as if they are in their neighbourhood joint on a lazy weekend arvo.  If all the tables are taken up, hey we can hang on the street and perhaps take the opportunity to view the wall graffiti on nearby lanes.

I must say the coffee blend served lived up to match the gelatos.  My cuppacino was bold but offered a striking flavour. It had body, just the optimal froth on top and a wholesomeness in the cup.  Some competitors have good gelato but less than awesome coffee, but not here.

The name can say it all - the Cow indeed takes each visitor to this cafe to the Moon.