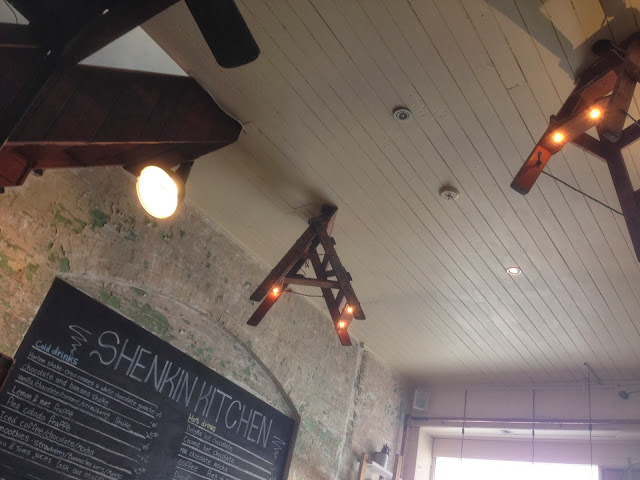 The Shenkin, it just exudes with an attractiveness, a uniqueness and a buzz.  It has an espresso bar in Newtown along King Street and a cafe in nearby Erskinville, but I had longed to pop in its Enmore outlet, opened in April this year, with unusual food, Israeli, influences of Mediterranean and yet with a tinge of Eastern Europe. This Enmore kitchen is open seven days a week for early breakfast until a late tea - and from Wednesday to Saturday evenings, offers dinner menu till 10pm.  It echoes tradition and still feels modern and young.  I compare its refreshing food menu with its daringness to place ladders to hold ceiling lights.  The cafe may be smallish, but invites in mothers with prams, couples in love and is blessed with smiles of the staff and the comfort of its guests.

There are lots of bread options - with rye choices, banana bread and sourdough filling up the mainstream Aussie spectrum, but yet with surprises like bureka and mixed berry baked stuff.   Israeli salads are served with chorizo, bacon and non kosher temptations. The Shenkin big breakfast  may be a safe corner, but then I see shakshuka sauce, hummus, pita bread and couscous.  You can have the varied ingredients in wraps, omelettes, pancakes, burgers or on toast. In one sitting, you allow your palate to be stimulated  by the food styles of more than the Middle East, encroaching a bit around the Mediterranean and with the familiarity of Aussie produce.

The Shenkin honours a street in Tel Aviv. The family who founded this business has a rich past across various countries like Poland, Russia, Egypt and Israel - and the Shenkin significantly illustrates and celebrates the dynamism, energy and cultural vibes of immigration.   The founder, Arie Haikin, opened this delightful business only six years ago, and the cafe outlet has a one Coffee Cup awarded by the Sydney Morning Herald.  Arie has two sons, Din and Bar, to run this eye opener of a modest and yet outstanding restaurant.  It is not just the coffee, milkshakes or juices available  that add to the fun of the Shenkin, but I reckon more so its business concept, its communal spirit and its homely feel.  Tables may be small for couples, but there are also the bigger canteen styled wooden ones that encourage strangers and mates to mingle.

On a late Saturday afternoon, I could see fellow lunchers drop by as if to a friend's place. I am served with a embracing engaged style, the staff seemed relaxed that day even if they had to cope with a ever growing crowd. The setting inside the kitchen outlet is reminiscent of European ghettos and yet so synchronised with the  lifestyle expected around this Newtown- Erskineville-Enmore hub.  I realised that one does not have to always splash excess dollars to create a right mood for diners, only to show the sincere heartfelt energy of well trained welcomeness and tasty food.  Practical and hard working, the Shenkin offers both breakfast and lunch items all day long.  It is akin to open house on a festive day and once the Shenkin opens its doors, it will not turn away people.  I loved the timber flooring at the Enmore outlet, in gratifying contrast to the raw brick of one of its main walls.  Oh yes, a thought about the shakshuka - originating from North Africa, it is based on fresh poached eggs, dazzled by a fiery tomato based sauce and contains no meat or dairy (so it is kosher). Selected olive oil, paprika, cloves, red chill, cumin and capsicums go into the making of the recipe.