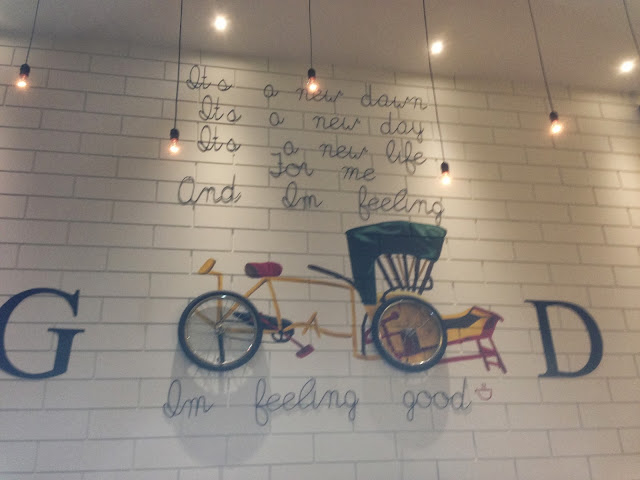 Mention Whitetaways to a Brit colonial who used to reside in the old Malaya - and he or she would beam up, ready to recount the atmosphere and stories of the period, when Whiteaways was a grand department store and the longed for goods and clothes from the mother country were found. The posting from the wet and swept isles so long ago and so far away, when ship travel was predominant,
to the humid and heady monsoon island of Penang, was already an adjustment to cope with and anything to occasionally delight and quash any home sickness was significantly appreciated.  The old place is gone now, now replaced by recent renovations to lure tourists and locals alike to visit again and consume, to spend mostly evenings away and to provide an entertainment hub.   One of such innovations is the Twelve Cups Cafe.

The interior of Twelve Cups is lined with bold sweeps of yellow, white and pastel, underscored by boundaries of brown, maybe comparable to the juices, desserts and cakes served here, plus the coffees made to your order. The evening we were there, a resident artist was drawing various miniatures of the Eiffel Tower and this had instantly drawn a circle of observers to the counter, mainly mothers and kids. The cafe has taken a portion of the former Whiteaways Arcade, now unrecognisable inside, but still with a strong facade presence outside, at the corner of Bishop and Beach Streets in the Georgetown quarter of Penang Island, not far from the ferry pier and still surrounded by branches of banks.

It had been a rainy evening, one of several consecutive nights that week and we were somehow glad that we had a respite from the showers when we tried after dinner ambience there, watched the mostly young crowd and soaked in the cafe scene. This was not a place to just connect to free wi-fi but gather in groups, show off the latest casual wardrobe and somehow mix in a place other than work or school. The demographics were mostly of Chinese descent, potentially on the cusp of studying in overseas universities, or just having a break from such regimes. Twelve Cups has a signature dish - the Mille Crepe. This French recipe uses caramelised sugar and maple syrup-Scotch pasty cream between its layers. "Mille" means a thousand. The menu is written on a chalk board and we could not help being captivated by part of the lyrics of the hit "Feeling Good" displayed on the wall - complete with a painted depiction of a Penang Island trishaw and two actual wheels. 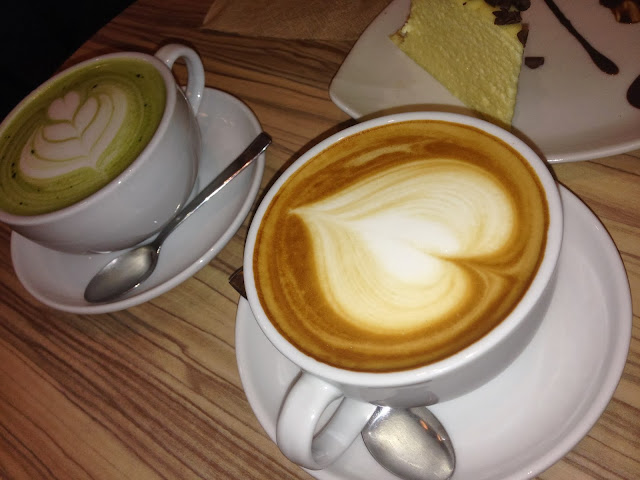 Yes, there are exotic versions of Mille Crepe available at this cafe, including Matcha Red bean, Earl Grey, French Vanilla and chocolate. So you cannot be blamed if you find yourself swirling in a fusion blend of Japanese, British, French and Australian influences. I was reminded of Sydney style barista cafes and bakeries, enjoyed the casual atmosphere and found the coffee good. Twelve Cups has the full spectrum like Americanos, Espressos, Cuppaccinos, Latte, Mochas and Macchiatos. Although no true blooded Italian would consume lattes beyond 11am in the morning, in a city which had nurtured and facilitated multiculturalism long ago, old rules and conventions are cast aside.

The cake counter had a variety to choose from even after 10pm. Lifestyle on a tropical isle is to stay late, have happenings after midnight and sleep before sunrise. Although the Mille Crepes often had creamy stuff or crunchy crisps between their layers, I did not find them over whelming or too rich to the taste. Coffee, ice cream, sugar, good service and smiles do mix well in this cafe. Prices are reasonable between ten and twelve Malaysian Ringgit. There are night clubs, lounges and wine bars in this precinct - and Twelve Cups may be just another step in night hopping for many of its patrons. For visitors wanting to get away from the spectrum of heritage architecture and environs in old Georgetown, the Twelve Cups offers a vibrant alternative. I was told the cake flavours seem to skew on East Asian tastes and usually Western styled creations are more rich on the palate. The Twelve Cups is best as a walk in cafe, as vehicle parking can be challenging. 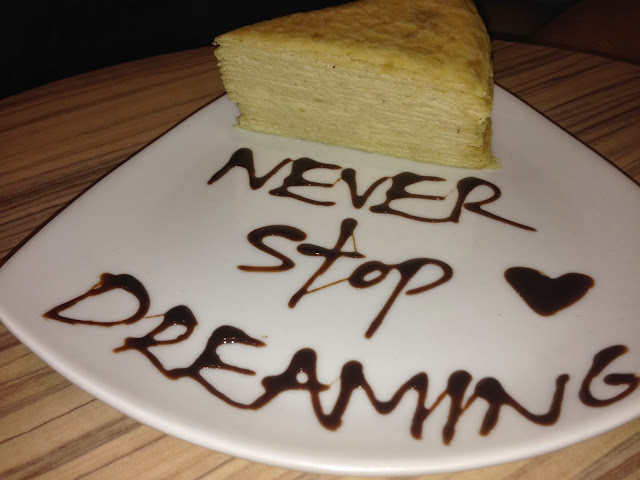