Hoi An - A Time Capsule 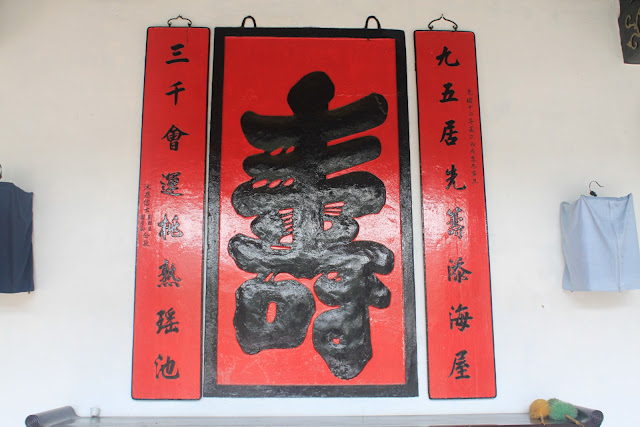 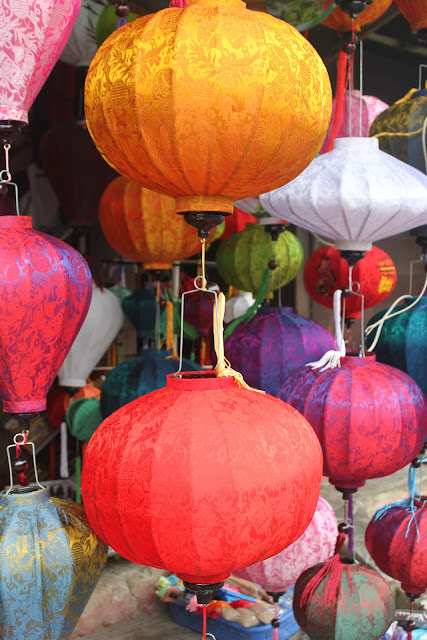 Silk fabric lanterns, leather craft and good tailoring are hallmarks of Hoi An.  A UNESCO world heritage declared site, it is nevertheless a laid back corner of Vietnam, accessible best from the significant coastal city of Da Nang, and a long established place which  still does not fail to positively delight and surprise any visitor.  Just outside the city are padi fields, mangrove swamps, fishing villages and a proximity, to its north, of the infamous DMZ or Demilitarised Zone, which played a significant role in the Reunification War of the sixties and early seventies last century.  The Old Quarter is in a rectangular grid of user-friendly streets and lanes. Visitors are advised to stay a minimum of three days in Hoi An to best enjoy its diverse offerings.  My group arrived at dawn in Da Nang by train from Nha Trang in the south,  before being bused to Hoi An.  Below, the boats at the Thu Bon River. 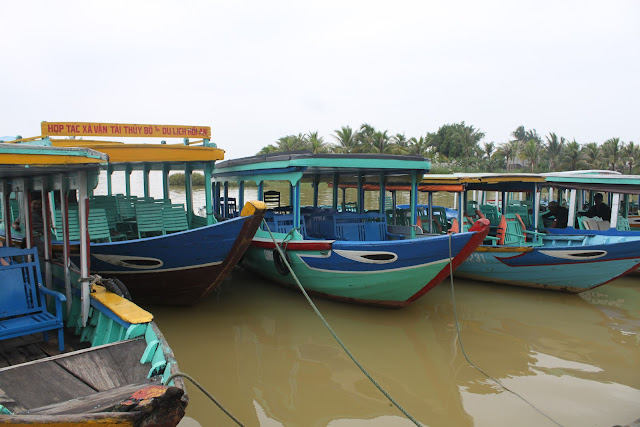 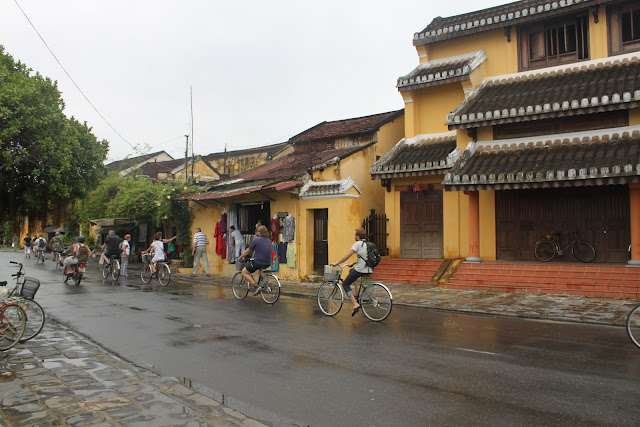 Even on a rainy day in November, there are many indoor preoccupations and activities in Hoi An's Old Quarter.  There are blanket tickets that can be bought upfront which covers the entry fees to many separate cultural places of interest.  There are still, however, several other buildings where you can still enter and explore on a complimentary basis. 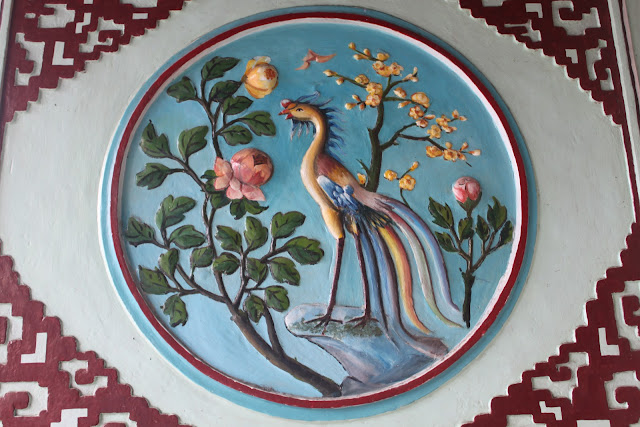 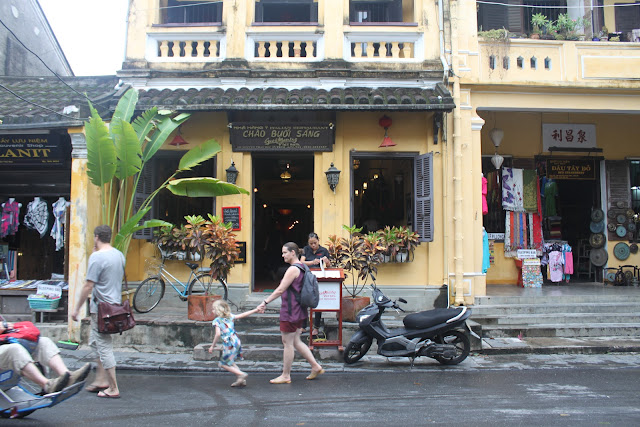 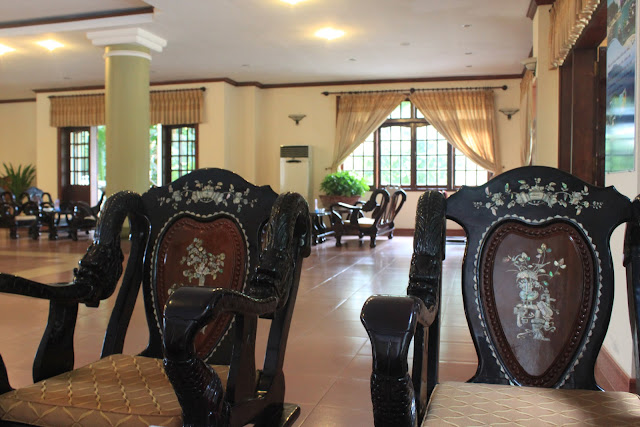 Inside the spacious lobby of the Hoi An Golf Club Hotel (photo above), one can sit on mother-of-pearl decorated furniture. Much cooking in Vietnam today still utilises charcoal  (grilled meat skewers in picture below), which can provide a distinctively different taste compared to  food cooked by gas or electrical stoves.  Cuisine influences from Hainan Island, Fujian, Japan, Guang Dong, Laos and Thailand can be seen in Hoi An, plus the royal kitchen styles from Hue. 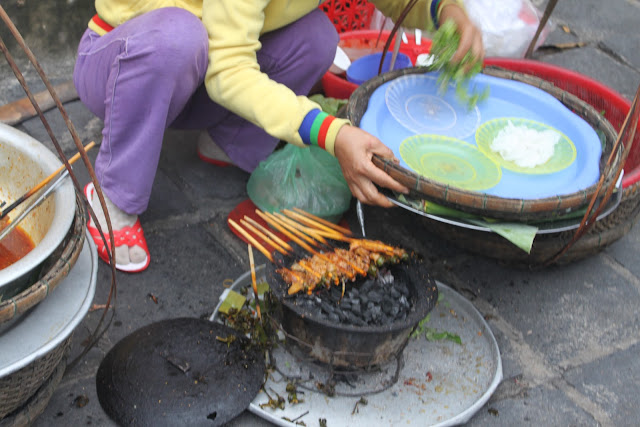 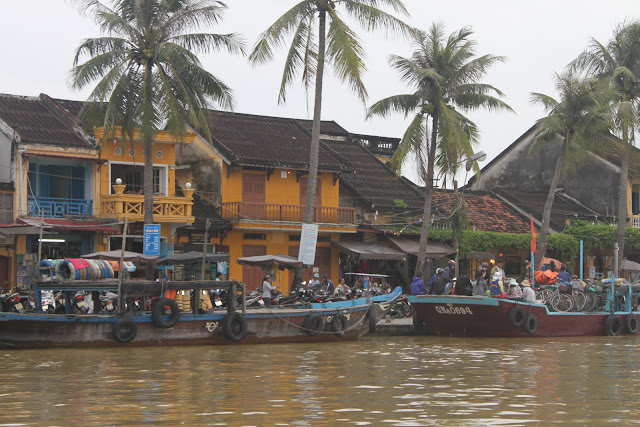 Old wooden boats still ply the river, with old shops and houses, most two-storey, fronting just right up to the edge of the road, in scenes reminiscent of many towns and villages in South-east Asia.   Hoi An was, and is, a trading port, essentially cosmopolitan, serving as a gateway to commerce, immigration, cultural fusion and food experimentation.   The Japanese traders built a cute and compact covered bridge in 1593  to connect the two main parts of Hoi An's old quarter- the Chinese and Japanese precincts.  The bridge symbolised openness, co-operation and togetherness. The Japanese presence in Hoi An was abruptly curtailed when the Tokugawa Shogunate  issued edicts forbidding Japanese from residing abroad.

The Cantonese has an elaborately embellished Quang Dong Assembly Hall, built in 1786, two years before Captain Cook spotted Botany Bay in Sydney, Australia and ten years after the American War of Independence completed.  The main altar in the Assembly Hall is devoted to Kuan Kong, representing loyalty in Chinese society, whilst the Hall also honours Thien Hau, Goddess of the Sea.   There are several bas reliefs and wall murals inside the Assembly Hall, as seen below. 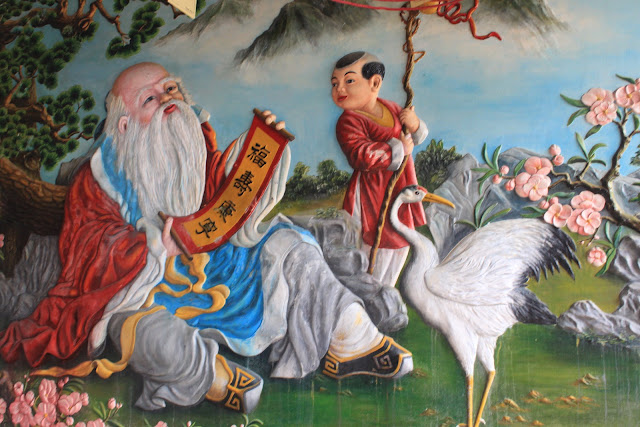 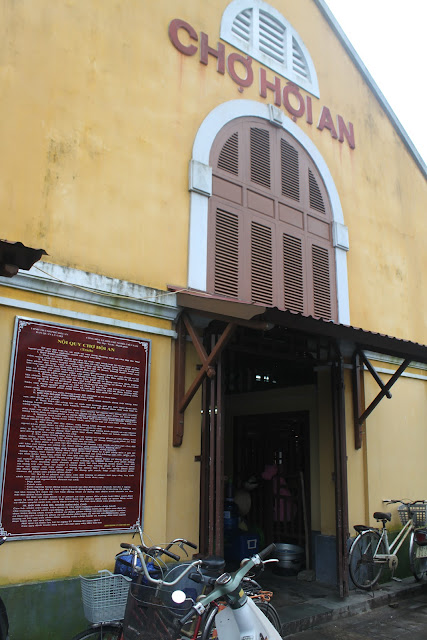 The main markets in Hoi An, sited on the  river front (picture above) bustles with a variety of fresh and dried produce and is mainly patronised by locals.  The Thu Bon River flows for a distance downstream from Hoi An before it reaches the South China Sea.  The protected location of the city and port translated into an advantage, beings secure from pirates, full on South China Sea monsoons and provided a haven of rest and safety for the many Japanese and Chinese traders in the past thousand years, literally riding the winds in to and out from Hoi An.  Below, a clumpy bamboo spot for a cyclo rider passing by on a narrow lane, typical of many in Hoi An's Old Quarter. 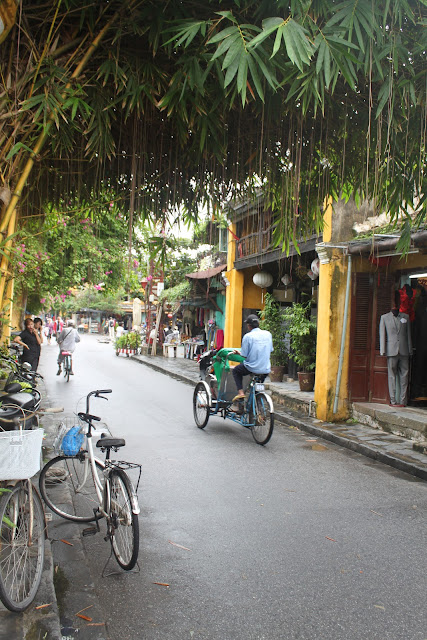 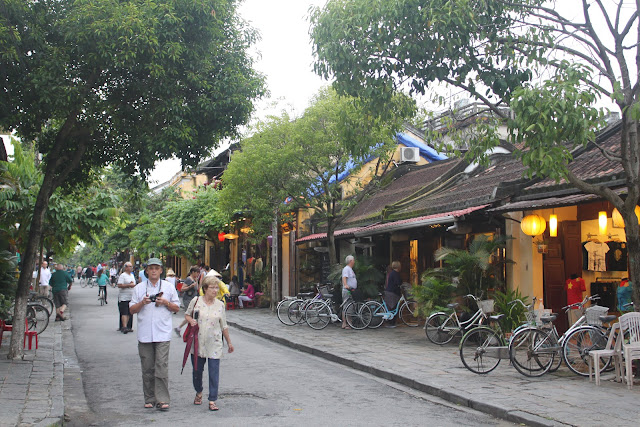 The streets are made for walking, and any one can wander in a relaxed manner through Hoi An's riverside precinct and discover the pleasures of old architecture, fine tailoring, small and easy going pubs, street food, interesting restaurants echoing the best traditions of Vietnamese food and window shop on a host of crafts, souvenirs and art pieces.  Many visitors cycle or motor bike, but strolling is a good option when it is not raining and especially when it is early morning or twilight.   The old quarter of Hoi An has been so well lived in, it resonates with history, heritage and variety. The traders who came in the past had to live there whilst waiting for the monsoon winds to change - and in the process contributed to the cultural richness of the city, especially when you walk through the corridors and passageways of temples, bridges and old family courtyards (like the House of Quan Thang, the House of Tan Ky and the Tran Family Chapel). 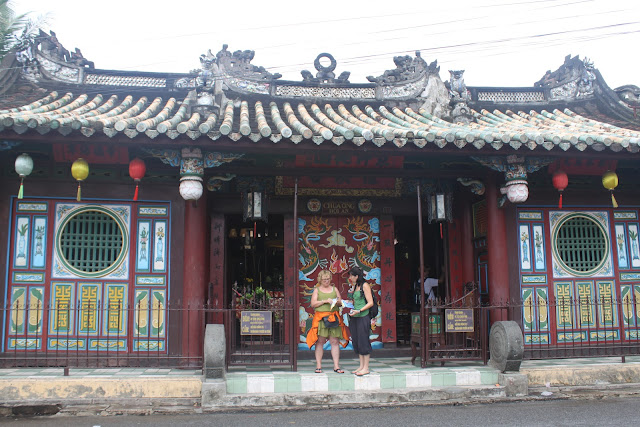