There are plenty of Banh Mi outlets around Australian capital cities these days - the quick but wholesome yummy buns have proved to be a good on the run snack, especially at lunch time, with a healthy dose of sweet Aussie produce and Vietnamese flavoured grilled or steamed pork or chicken or in pate forms.  Banh Mi in the Antipodes started life after the arrival of Vietnamese in the early 1980s seeking a safer refuge from the aftermath of the American war in their country of birth.  It is already fusion food when concocted in Vietnam, with French baguettes, Asian sauces, mayo, coriander, chili bits, onion cuts, delightful fresh cucumber and vinegar infused carrot slices all in one bite.


In the Wollongong area, there is a variation with southern Chinese styled roast pork slices (instead of the cold meats) at Sam's Crusty Bread along the Princes Highway in Corrimal, a suburb just north of the city centre.  So it was with delight that another Banh Mi outlet is found in the Bakery Boys, sited along lower Crown Street (towards the junction with Corrimal Street).  The Bakery Boys may have roots in Vietnamese food but they have created a variation of the hipster and updated version of the Aussie cafe.  Yes, there is the barista coffee machine, breakky food and brunch choices. So instead of just bacon and ham, sourdough and Western styled meals, the Bakery Boys have a short but simply effective menu that offers a slight changed alternative from most of the cafes in the Illawarra. 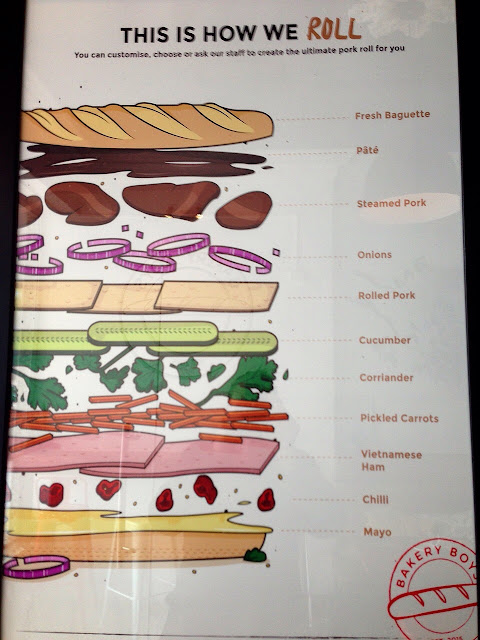 I tried the Bakery Boys breakfast roll, with an omelette sitting inside a baguette roll with marinated pork sausage slices.   There are eye catching baguette rolls placed on the counter.  A customer has an intense piccolo ordered.  It does feel like a budding gathering hole, they only opened two months ago. I make a mess of the baguette crumbs on the table.  Oh yes, they also have hot pies.  Schnitzel is one of the selections for Banh Mi here.


The Vietnamese brewed ice coffee is made with condensed milk but allows the drinker to appreciate the different sensations of coffee blends from Vietnam.  Many lunch time customers walked in from their business offices or tradie assignments  - there is a screen that is dedicated to live sports (Manchester United was playing the San Jose Quakes when we were there).  There is ample seating but also a good turn around of take aways.    One wall has an etching of a street scene and the people behind the counter are enthusiastic and active.  Across the road, one can see the driveway to the Downtown Motel.   The Bakery Boys are not far from Lee and Me, Lower Crown East and the Sugar Cube, long established players in this part of the city.

I found the Bakery Boys an interesting business model on the coffee retail scene - having practical pricing, encouraging a good turnover of their produce and emanating the look and feel to attract the market in the Wollongong area (students, workers, beach visitors, couples and families).   Yes, they have further elevated the popularity of the Banh Mi in the process - you no longer have to travel to a so-called Asian suburb in greater Sydney to get your hands on this interesting French-Asian roll, which can also form part of your catering orders.