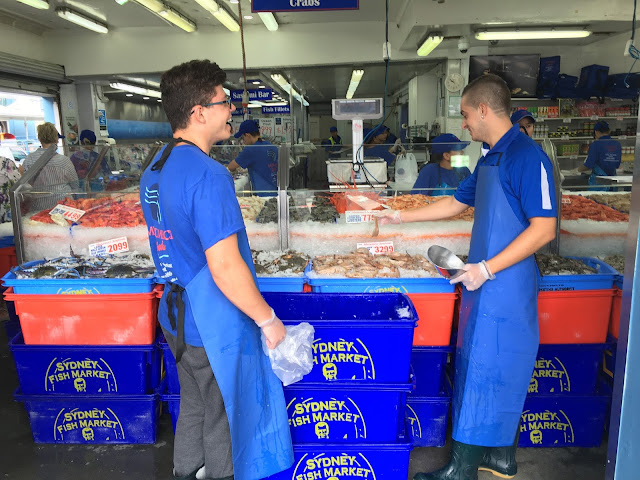 There are fish markets of all sizes in Australia - in shopping centres, in quaint family run  shops by the beach, in farmers markets, near fishing village marinas and more.

The biggest Daddy of them all is the one at Blackwattle Bay, Pyrmont, south west of Sydney's city centre.  At last count, around two million people visit the markets each year.

Accessible by driving, light rail, walking or from the waterside, the Sydney Fish markets are not particularly large in area or variety of shops when compared with some of those overseas like Tsukiji in Tokyo and the La Nueva Viga markets in Mexico City.  What the SFM offers best perhaps is a laid back atmosphere, an authentic wet market feel, lots of tasty bites and easily watching the world go by.
Crabs, clams, oysters, octopus, shrimps, squids and lobsters are popular with visitors apart from grilled fish of different varieties.

Seagulls and black Ibis wander around without a care, whilst pelicans love to show off with their exercises in take off and gliding down to land off wooden piers.  Families gather especially on the weekend,  tourists take delight on most days, young students saviour their first experience with sea urchin or Barramundi and in one spot, every one can appreciate the variety of fresh seafood and produce.  Wild harvest, frozen packs and aquaculture produce are available apart from the usual fresh seafood items displayed on open shelves or in boxes.

You can also join walking tours conducted by the SFM to watch oyster shucking, better understand the Dutch reverse auction system for seafood and view sashimi making, for up to two hours. 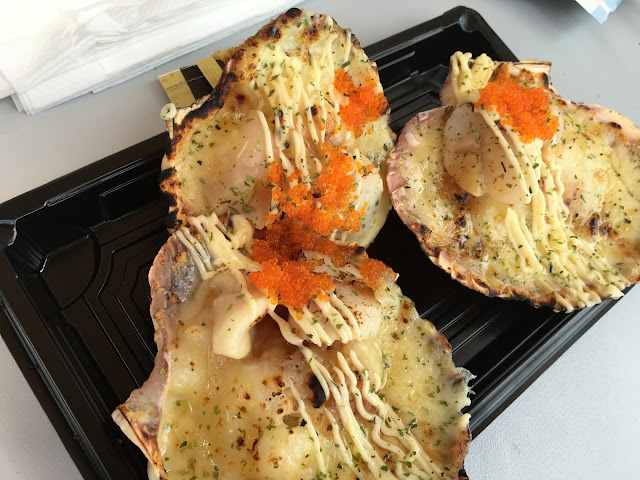 Well, it is not just about seafood and beverages in this venue - you can carry off your selections of seasonal fruits and veg, plus meats.  A captivating feature of the SFM is enjoying fresh and raw oysters shucked off their shells, or carting off per dozen cardboard trays for home.  There are wholesalers for businesses and retail for every one.   There is a souvenir shop at the front of the main entrance, making the SFM an obvious touristy place.  Since 1989, there has been a Seafood School operating at the SFM. A Chinese restaurant on the upper floors offers lunch and dinner, with it being used as a wedding reception venue as well.

The eating tables can look messy on the outer promenade by the water, as fauna try to clear up let over bits and there is no one employed or seen cleaning used tables.

The source of the seafood is labelled by law, and many a treat comes from wild catches and farmed produce from the eastern seaboard of the Australian continent, or Tasmania.   Avoid going to visit the SFM during the Easter or Christmas periods, unless you do not mind being stuck sitting in a traffic jam.  The convulating nature of road access to the SFM also does not help, oh please do something the powers that be!

For wholesalers, auctions are a sight and experience to behold. It is said around 20 thousand tonnes and a hundred varieties of seafood exchange hands at each such auction at the SFM.   In terms of tonnes, the SFM is the third largest in the world but is second ranked in terms of seafood variety (after Japan). 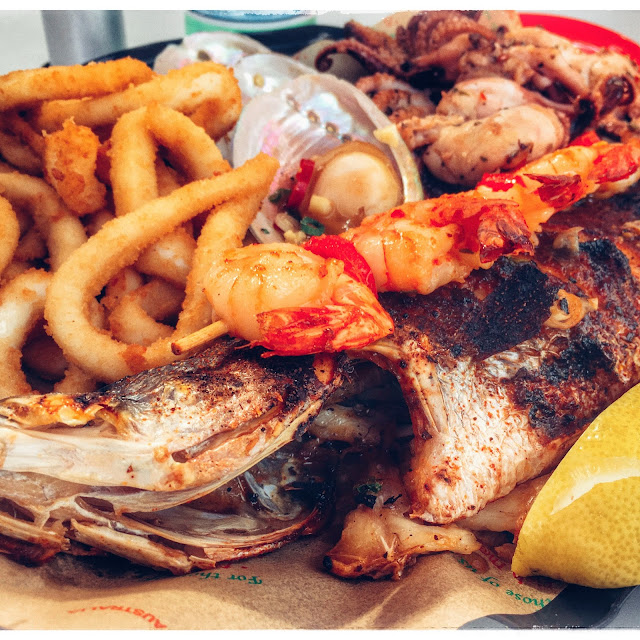 It is often rewarding to explore parts of the SFM away from the sometimes maddening crowd.  As long as it is not slippery or cordoned off, you may wander and enjoy perspectives away form the sales, snacking and vehicle parking areas.  Oh yes, parking fees are rather on the high side.  I recommend eating fresh on the spot, rather than bagging purchases home, but if you do the latter, do organise your eskys and car boot.

The Sydney Fish Markets are open  from 5am each day until mid-afternoon.  As any seasoned seafood devotee knows, the best catch is early in the day.  Unlike the fresh veg and fruits markets like Flemington and Paddys in other parts of greater Sydney, there are no real value bargains of you go later in the day as the freshness of seafood can change.

The SFM is not a monopoly for seafood sales in greater Sydney.  In New South Wales, seafood catchers can supply direct to any one in possession of a valid Fish Receiver's Permit.

Auctions of seafood at the SFM since 1989 follow what was used for tulip sales in Holland a few centuries ago - the Dutch reverse auction system, whereby auction prices start around three dollars above assumed market prices and then go down a dollar every computerised revolution until a buyer stops the button.  Running concurrently with the main Dutch auction practice, since 2001, is an online trading system introduced by the SFM.
For travellers around the world, other interesting fish market sites include Hong Kong's Aberdeen Seafood Markets; the Mercamadrid in Spain; the Maine Avenue Fish Markets in Washington D.C; the Busan Cooperative Fish Markets in South Korea; New York's Fulton Fish Markets and the Faskekorka in Gothenburg, Sweden.